[vc_row][vc_column][vc_column_text]Providing high quality special education services is expensive.  All public schools in DC receive “special education add-on” funding, but it is often not enough to cover the costs of services they provide.  One avenue some charters have pursued to cover those costs is Medicaid reimbursement. 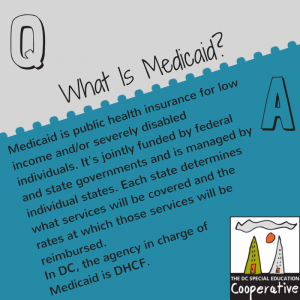 Although the Medicaid system is well established, it was not until 2003 that DC charter schools gained access. In 1999, the DC Special Education Co-op (the Co-op) sought Medicaid provider status as an Administrative Service Organization (ASO) for all charter schools and was denied. Back then, charter schools were fairly new to DC and the city’s Medicaid agency had to be convinced that charters were actually public schools! The Co-op took on the fight: we testified at hearings, wrote memos, and pleaded our case to anyone who would listen (and even many who wouldn’t). By 2003, we won the battle. Charters were finally recognized as Medicaid providers and were able to be reimbursed for services they provided to students with Individualized Education Programs (IEPs). We have seen, however, that access and actualization are very different things.

The Co-op was awarded a technical assistance grant in 2007 that allowed us to help 20 schools become Medicaid providers.  In 2008, the Co-op demanded a seat at the table as DC worked on a new Medicaid State Plan to ensure that charter schools were represented.  Over the years, more charter schools have started to access Medicaid funding. Concurrently, we continue to push for equity, guidance, favorable policies, efficiency, and transparency.  It has not been easy – every year we encounter a new obstacle and every year we work to move over, through, or around them until our schools see results. 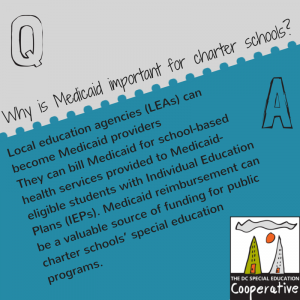 Anyone who has worked with the Co-op in the realm of Medicaid knows that we’ve questioned our involvement at every turn. As a tiny organization with big goals, we were not always sure Medicaid was where we wanted to allocate our limited resources. But limited resources and big goals are not unique to the Co-op; they are part of the special education in charter schools narrative, and Medicaid is a funding source that can’t be ignored. 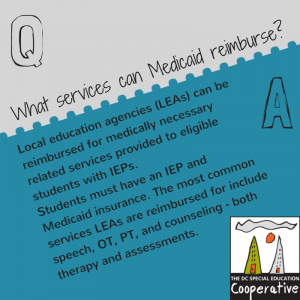 Fast forward to today: the Co-op is still here! We’re still advocating and working to improve city systems for charter school access to Medicaid funding. We now collaborate regularly with DHCF, OSSE,  and DCPS. We’ve moved past demanding a seat at the table and are now an invited guest. Charter access to Medicaid still needs improvement, but our advocacy has reduced obstacles significantly.  For the first time in years, we aren’t questioning our involvement; we know the benefits are concrete and worth working for. We now encourage all charters to consider participating in Medicaid reimbursement and will continue to work to streamline process and access for the benefit of all charter schools across DC.[/vc_column_text][/vc_column][/vc_row]